Jayden is a happy and intelligent five-year-old boy who has Spastic Quadriplegic Cerebral Palsy. His mum tells us how difficult it has been to get the support they need.

This is their Secret Life.

Jayden was born by emergency caesarean section in the Falkland Islands. He went without oxygen for approximately seven minutes. He spent almost two months in a neonatal unit, with staff there calling him ‘the miracle baby’.

In 2015, Jayden and I moved to Cardiff so he could access specialist help not available in the Falklands.

Jayden is affected by his cerebral palsy in a number of ways: he cannot walk or sit independently. He is currently non-verbal, although he is learning to sit and say singular words. He loves to interact with other kids, he has a wicked sense of humour and learns very quickly. He is making significant improvement every day and I am so proud of him. He tries 110% at every task and particularly enjoys the school environment.

It is very hard to summarise what it’s like to look after Jayden.

I cannot work, because even though I am well qualified and experienced I have not yet found an employer who can be flexible. I have applied for hundreds of jobs but I cannot work outside school hours or miss Jayden’s appointment schedule. And childcare is very expensive. I recently applied for a holiday programme at Jayden’s school two days a week. It should cost £20 per day but because he needs one-to-one support, I would be charged an extra £12.50 an hour, which takes the total cost to £120 per day!

We live in a private rented flat, but although Jayden now needs lifting equipment, we cannot access specialist housing from the council. We have been on the list for over two years and have not been offered anything.

I have been shocked how disabled children and their families are treated.

I have found that I have had to fight for every last bit of equipment. As a parent you spend most of your time on the phone trying to get answers. It’s exhausting. 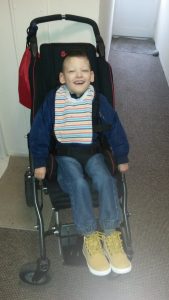 I have been quite horrified at how I have been treated by the DWP and the local council.  I have been called a liar. I have been told my child didn’t look disabled. Told to go back to my own country.

Access to days out and childcare is another obstacle. Even taking Jayden to the park is very upsetting for me as there is very little he can go on apart from the baby swings and it is difficult to get him in them on my own. The looks and comments from other parents are upsetting. I have only come across one disabled swing at the park but some lads broke it and nearly three years later it still hasn’t been replaced.

I can’t afford to run a car at the moment, so we go everywhere by bus or train. I applied and for a bus pass was refused five times but finally got one on the sixth try.

Bus drivers can be very rude and people very often will not move out of the disabled space. We once got thrown off the bus because the driver wanted me to fold my disabled buggy and I couldn’t on my own. The same kind of discrimination occurs on the trains as well.

It is very hard managing at home with no equipment and having to endure stares and comments whenever I go out. I try and give Jayden the best of all I have but as a single parent it can be just so stressful.  Especially worrying is the future and what it holds.

This is the part of our life that people simply don’t see.

This is the Secret Life of Us.