The Secret Life of Ben and Jo

Ben, 16, is a Scout leader, loves his PS4 and dreams of going to university to study archaeology. Bright and chatty, he has a diagnosis of Asperger syndrome and clinical depression. This is his story, as told by mum Jo.

I had to battle for years for Ben’s diagnosis, which eventually came when he was nine.

The diagnosis was a relief but I didn’t know what to do next, how to understand my son’s needs and what support I should seek. I ended up spending a lot of time reading and researching autism. I started introducing strategies and these have made a difference. But, seven years later, Ben is not receiving the full range of support he needs.

I know that services are stretched but it sometimes feels like they’re non-existent. We have now been waiting nearly two years for a psychological input from a specialist. It’s really frustrating when I think about the difference this could have made to Ben’s life.

Ben has recently been diagnosed with clinical depression and finds it hard to leave the house, which means he’s missed out on a lot of school. We found a specialist school which meets his education needs but his mental health needs just aren’t being met.

He is bright and wants to go to university to study archaeology. But without specialist psychological support for his sensory difficulties, anxieties and depression he’s continuing to struggle. 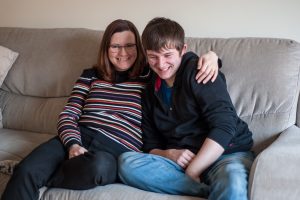 He has problems with things like bright lights, loud noises and unexpected changes and can become so overwhelmed that he loses control. This can be difficult when we’re out in public. Over the years, we’ve almost got used to strangers staring and making comments. But we’ve also seen the difference that public understanding can have.

One incident sticks in my mind. We were shopping and Ben became so overwhelmed that he lost control and was shouting and swearing. People around us assumed he was being naughty. Some stared and others said some really hurtful things.

Then I heard someone telling the crowd to back off. She came over, knelt down in front of Ben and helped calm him down. I was so grateful that I was in floods of tears. I remember her saying she worked with autistic children. Still in a daze, I thanked her and left. It’s still one of my biggest regrets that I didn’t ask for her name.

Ben and autism bring both bad and great times to our family and we wouldn’t change him for the world. Through all the difficult times it’s important to remember that we are a normal family and we have so many happy and enjoyable times together. We love going out to the cinema and up to our local pub for meals.

He is a young leader in a Scouts section and also an Explorer Scout, he loves going on camp and teaching the younger Scouts. The Scouts and Cubs look up to him when he helps me out with my pack.

Ben has a witty sense of humour and is always making us laugh. He loves his PS4 and can talk the hind legs off a donkey with all the information he has. Usually I have no idea what he is on about so he will try and explain it to me. He is a fun loving and very caring son and I couldn’t ask for a more rounded child. We love him to bits.

This is the part of our life that most people simply do not see.

This is the Secret Life of Us.

Sign up here for regular updates on our campaign for improved health and social care for disabled children and their families.